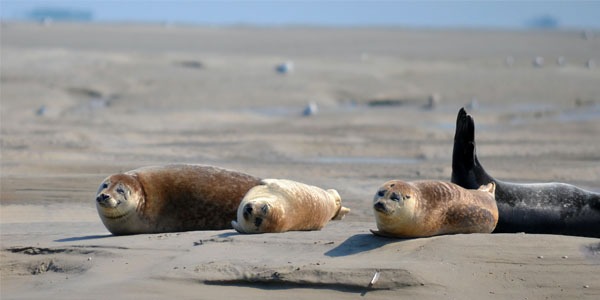 Somme Bay is one of the places to see in Picardy and more widely in Hauts-de-France. Classified as a "Grand Site de France", this bay is a wonderful place that can only delight nature lovers and wide open spaces.

From a geographical point of view, Somme Bay extends between the Pointe du Hourdel in the south and the Pointe de Saint-Quentin-en-Tournont in the north. The bay corresponds to the estuary of the Somme which joins the Channel.

The Somme Bay is a great place for ornithology and is internationally renowned.

It is home to many sedentary and migratory birds, especially in the Parc du Marquenterre. You can find greylag geese, white spoonbills, avocets or even whistling ducks...

The Bay is also home to a large colony of grey seals and sea-calves.

There are also many Henson horses and salt marsh lambs.

The Somme Bay is composed of two main environments:

- the slikke: mudflats covered by the sea twice a day

- the schorre (or "mollières"): covered only during the high tides.

The vegetation varies greatly between these two areas and we find specialities of the Bay:

The best time to visit the Somme Bay is from March to October and climate is oceanic.

- Beginning of October : festival of the transhumance of the Estran sheep in Le Crotoy

To finish, here's a list of activities not to be missed during your stay in the Somme Bay:

- Seal watching: in the harbor of Le Crotoy and in front of the Bassin des Chasses, along the Jeanne d'Arc quay in Saint-Valéry-sur-Somme, at the Cap Hornu, at the Point du Hourdel, along the coast in Cayeux-sur-Mer.

- Visit of Saint-Valery-sur-Somme: the stone tower, the house of Anatole France, the calvary of the sailors, the statue of the Roche Madone, the commercial court, the salt storehouse, the chapel of Saint Pierre, the Courtgain (sailors' quarter), the Saint-Martin church, the Guillaume towers, the Porte de Nevers, the castle, the abbey, the Picarvie museum, the Herbarium

- Visit of Le Crotoy: the Saint-Pierre church, the marina and fishing port, the Jules Noiret promenade, the remains of the 12th century fortress, the Jules Verne villa

- The railway of the bay of the